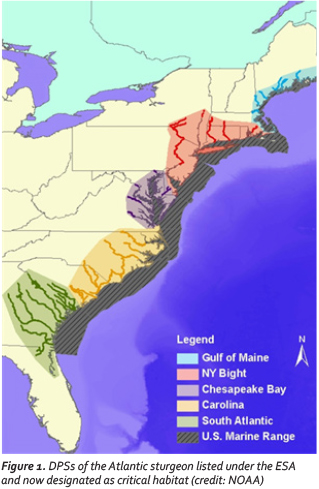 To support the recovery of the Atlantic sturgeon, the National Oceanic and Atmospheric Administration (NOAA) has enacted rule 82 FR 39160, which designates critical habitat for threatened populations in the Gulf of Maine and endangered populations in the New York Bight, Chesapeake Bay, Carolinas, and South Atlantic distinct population segments (DPSs).

Finalized on August 17, 2017, the designations are aimed at protecting river habitat that provides migratory corridors and spawning and rearing grounds for the species. The rules do not create preserves or refuges; however, they may require changes to in-water activities to avoid adversely modifying the critical habitat.

The Importance, Steady Decline, and Protection of the Atlantic Sturgeon

Traditionally, the Atlantic sturgeon was important for supporting fisheries and valuable for its roe, which was in high demand as caviar.

Due to overfishing—combined with secondary factors such as habitat degradation and loss, “bycatch” in fisheries targeting other species, and habitat impediments—the species experienced widespread declines from the 1950s to 1990s.

In 1998, the Atlantic States Marine Fisheries Commission (ASMFC) instituted a coast-wide moratorium on the harvest of Atlantic sturgeon until at least 20 protected age classes are in each spawning stock. The National Marine Fisheries Services (NMFS) followed with a moratorium for Federal waters. Both are still in effect.

The five DPSs shown in Figure 1 were listed under the Endangered Species Act (ESA) in 2012. The recent designation of critical habitats for each DPS is a requirement of Section 4 of the ESA. (Figure 3 details the rivers designated within each DPS.)

As rule 82 FR 33160 takes effect, Atlantic sturgeon are present in only 32 U.S. rivers, and spawn in approximately 20. The species, which can live up to 60 years and weigh up to 800 pounds (see Figure 2), was once abundant in 38 rivers, from the St. Croix River in Maine to the Saint John’s River in Florida.

As previously noted, the critical habitat designations will not create preserves or refuges, nor will they directly affect a private landowner’s use of land or add new restrictions or regulations on fisheries.

However, the designations will have a potential impact on hydropower facilities, steam electric facilities, water utilities, and construction projects within the critical habitat area (see Figure 3 for a list of rivers within each area, by DPS).

This is because Atlantic sturgeon are anadromous, meaning that they live in the ocean but move into freshwater streams to spawn. 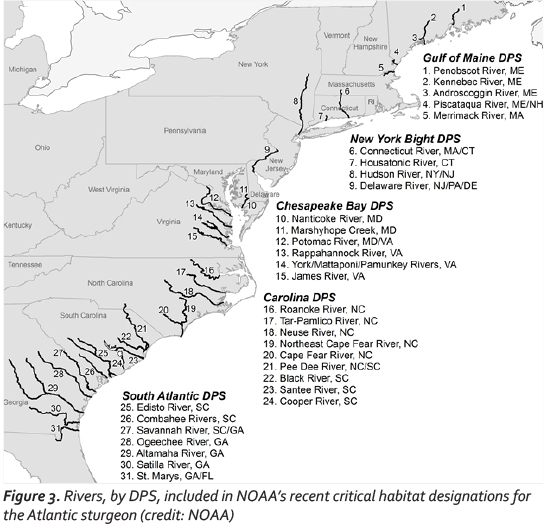 In the spring and early summer, most adults spawn in moderately flowing water in deep parts of large rivers, with eggs deposited on bottom substrate. After spawning, the adults migrate back to shallow coastal waters and estuaries.

Due to the new critical habitat designations, certain actions that are funded or authorized by Federal agencies will require ESA consultations to ensure minimal impact to habitat critical to the recovery of Atlantic sturgeon.

These actions include any that may adversely modify river substrate, change depth or salinity, impede passage, or increase sediment or temperature. For instance, activities that may be affected within the critical habitat areas include:

Most importantly, organizations should start including plans to avoid habitat destruction or modification in their consultations with federal agencies. For instance, marinas and maintained channels that contain physical features essential for Atlantic sturgeon conservation may be included in the designated critical habitat.

Further, since additional critical habitat may be proposed as new information becomes available, organizations should monitor any future developments within their geographic area.

By working with an environmental consultant to develop an effective, proactive habitat management plan, organizations can position themselves to successfully mitigate the effects of the NOAA rule while preserving and restoring the habitat of an important species.

Visit the August 17, 2017, Federal Register here to read the full text of the final rules designating critical habitat for the American sturgeon.