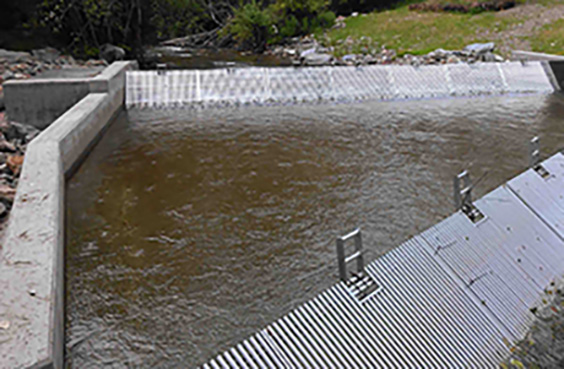 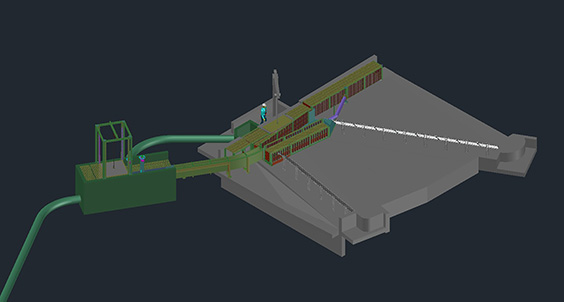 Kleinschmidt | R2 worked with a Technical Working Group comprised of Avista and state/ federal fisheries agency representatives in developing feasible concepts for the project. The goal was to trap both juvenile and adult migrants at the same time, while being able to pass floating debris and bedload that commonly occurs in the flashy mountain stream. Another criterion was to develop a design that could be adapted to other remote sites. The old trap was labor intensive and was rendered inoperable after the first high water event, resulting in the loss of the trapping season. The location of the trap in the middle of the stream was also a safety concern. Kleinschmidt’s engineers developed a design that provided a series of collapsible panels that would fall flat to a concrete slab when hit with large debris. The panels are easily repositioned after a high flow event. There are two panel arrays oriented to direct fish to a trap box located along the right bank of the creek. A pivoting jib crane is provided for handling the trap box. The panel system and trap box are completely removable from the creek during the non-trapping portion of the year.

After several years of successful operation of the trap, Avista reached out to Kleinschmidt to design improvements to the facility. These improvements included separating the upstream and downstream traps to allow for volitional upstream passage of adults, moving the juvenile trap box out of the channel for improved access and holding capacity, and adding a downstream trap channel to allow for trapping at higher flows. These improvements are currently under construction.

The new trap has substantially improved both safety for the operators and the effectiveness of fish collection. The trap has been in operation since April 2013 and has been successfully trapping fish as the design intended saving Avista annual operations and maintenance costs as well as avoiding long-term replacement costs. The permanent weir trap has effectively tripled juvenile Bull Trout capture rates compared to past methods and has been instrumental in recovering this local population of adfluvial Bull Trout.