Take a look at the water surface profile in Figure 1 below. The two profiles are for Class A low flow (subcritical throughout) with identical boundary conditions, flow conditions, and geometry. The only difference is the bridge modeling approach: the blue line is calculated using the energy method; the red line is calculated using the momentum method. For this example, which is a simple rectangular channel, the difference in computed water surface elevation and energy grade line from the downstream cross-section to the upstream cross-section is 0.10 feet and 0.16 feet for the energy method, respectively; those differences increase to 1.64 feet and 1.64 feet, respectively, for the momentum method. Those of you well-versed in the applicability of the various bridge modeling approaches (see page 181 of the HEC-RAS River Analysis System, version 5.0,Hydraulic Reference Manual [Brunner, 2016] for a great discussion on this topic), will answer: “the momentum method accounts for the drag imparted by bridge piers on the flow and should be used when pier losses are significant; that’s why.” But check out Figure 2. There are no piers. The bridge doesn’t even touch the water surface! 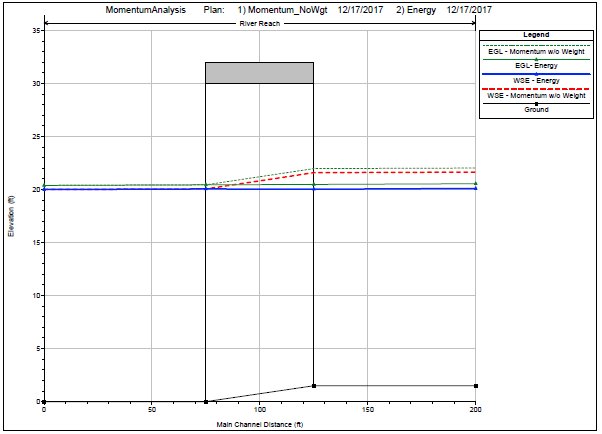 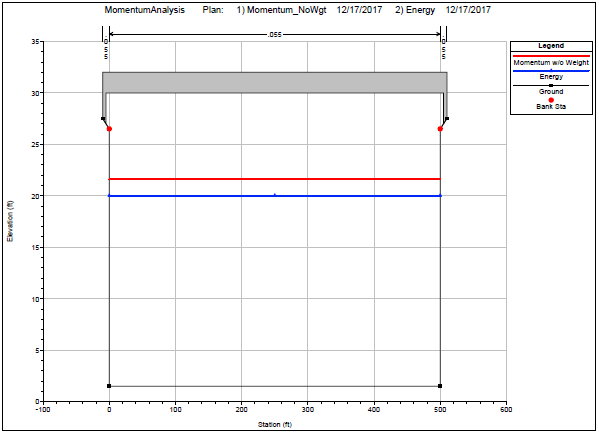 Figure 2: Representative cross-section of modeled bridge
From a hydraulic perspective, the bridge is doing nothing in this model. We could ignore it, stick in two cross-sections, press “run”, use the tried-and-trusted energy equation, and be on our way. However, “momentum” has been as familiar and comfortable a term as “energy” ever since we first smashed two model cars in physics class. We know the one-dimensional form of the conservation of momentum equation backwards-and-forwards, have solved the above problem by hand in our open channel hydraulics class, and know that the momentum equation should give us an answer similar, if not identical, to the energy equation. Even though the title of this post gives away the reason for the difference, I’m going to let the suspense build and provide some background to understand the implementation of the momentum equation in HEC-RAS at bridges for steady discharge.
To calculate energy losses across the bridge using the momentum method, HEC-RAS performs three separate calculations of the conservation of momentum equation between the three cross-sections presented below and illustrated in Figure 3:
1.  From Section 2 to BR
2.  From BR D to BR U
3.  From BR U to Section 3 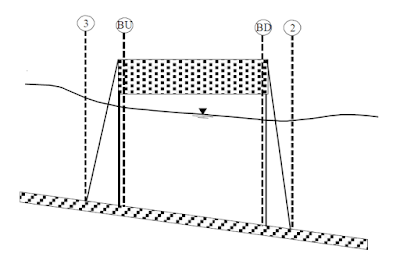 Figure 3: Conceptual layout of cross-sections for bridge momentum calculations; flow is from left to right (Figure 5-3 of the Hydraulic Reference Manual).  Note, this represents the standard 4 cross section layout for bridges as explained in the manual.  Sections 1 and 4, which are not displayed in this figure, represent the locations where full flow expansion (Section 1) and beginning of flow contraction (Section 4) occur.
Except for the calculation from Section BU to Section 3 which also includes a term for pier drag, the other two calculations are modified forms of the momentum equation provided as equation 2-37 in the Hydraulic Reference Manual: 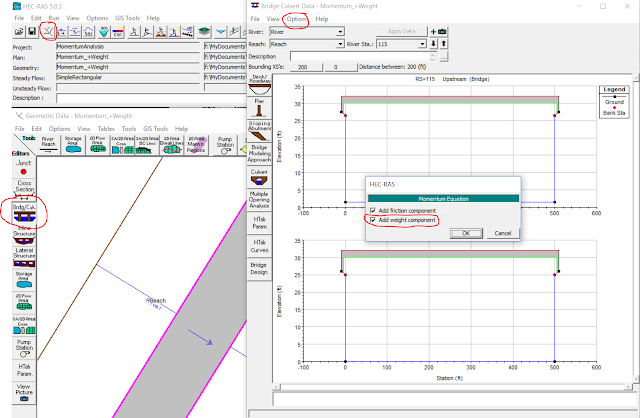 Figure 4: Location of the bridge momentum equation options menu
Let’s look at our results now, in Figure 5. You can’t see the difference because they are identical, at least for this simple example. They will be slightly different in most applications because of the contraction and expansions losses included in the energy method, but if the flow area of the two cross-sections are fairly similar, the contraction and expansion losses will be small and the two results near-identical. 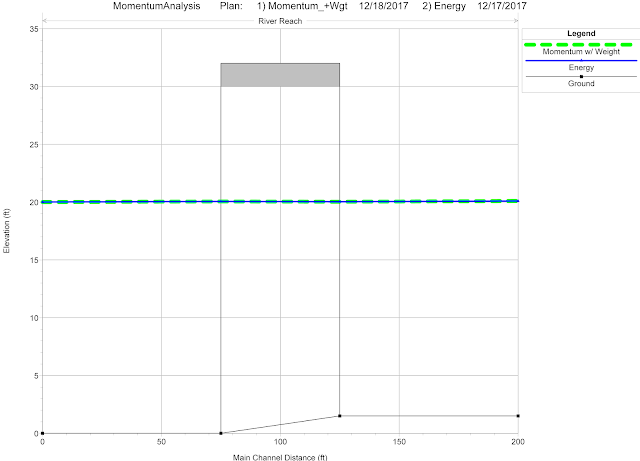 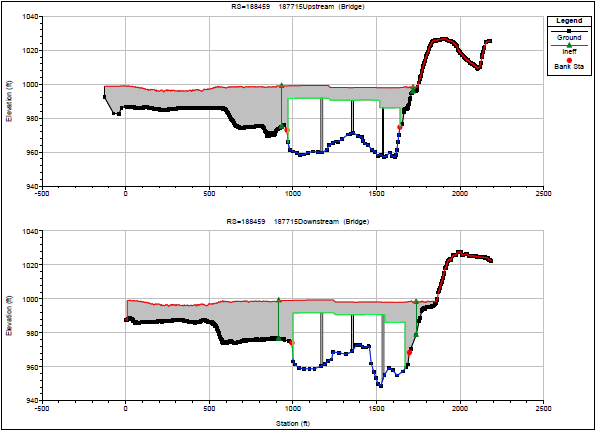 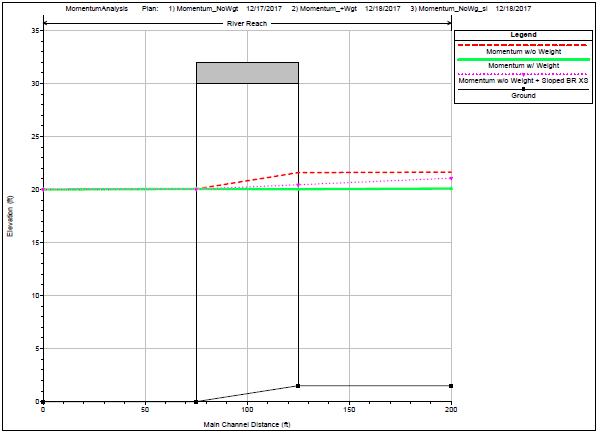 Figure 7: Bridge modeling results for momentum method: with weight component (green), without weight component (red), and Alternative 2 “spread out the slope” without weight component (magenta).
There you have it – more detail than you ever thought you would need on one small component of one routine in HEC-RAS! However, as we can see this one small component can sometimes have significant effects on hydraulic models that should be considered. At a minimum, we need to understand that when the bed slope decreases downstream, excluding the weight component may overestimate upstream water depth and underestimate velocity. The opposite is true for an adverse slope.  The post above is by no means the end-all-be-all for hydraulic modeling of bridges, it is merely to better inform modelers of the effect of the option to include the weight component in model calculations, so please continue to consider calibration data, high/pressure flow, supercritical flow, unsteady hydrographs, and other considerations in your selection of a bridge modeling approach!
This post was written by James Woidt, PE, a senior project engineer in the Scarborough, ME office of Woidt Engineering and Consulting. Mr. Woidt would like to acknowledge Gary Brunner, PE for his contributions to this article.