Dam Breach Modeling and the Assessment of the Self Rescue Zone

An interesting and informative paper by Mr. Bruno Neves of Brazil on HEC-RAS dam breach modeling and determining the self rescue zone, as well as the timing for alerting residents of the self-rescue zone.  The concept is tested using HEC-RAS with hypothetical 2D breach scenarios of the Santa Branca Dam in the Paraíba do Sul River in São Paolo State, Brazil.  Included within the paper is a comprehensive review of some of the most widely used parametric breach equations used today. 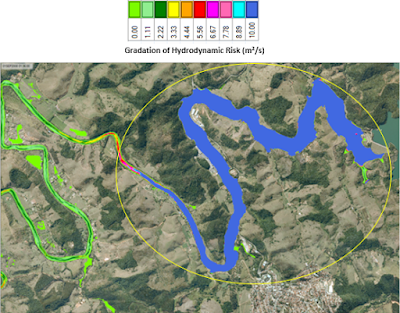 ASSESsMENTOF self rescue zones REGARDING BREACH OPENING METHODS
Bruno NEVES
ABSTRACT
Saving lives during dam break events is the main topic of this article, considering that a precise definition of the self-rescue zone (area in which authorities supposedly are not able to provide support to the population at risk in case of dam break, within the first minutes of the event) is crucial for planning mobilization of population in case of flood inundation. This paper presents a comparison of hydrographs, highlighting their dispersion through the self-saving zone, and sheds some light on issues of the hydraulic model.
1.    INTRODUCTION
Despite the low probability of a dam break situation, around 0.0001 per year, this sort of hazardous event may cause significant damage and considerable loss of life (Medeiros, 2008).
In Brazil, federal law 12.334/2010 has set the National Policy of Dam Safety which defines obligations to the stakeholders of dams. Through National Agencies of Natural Recourses, details of this regulation are being defined.
ANA (National Water National Agency) and ANEEL (Electric Energy National Agency) agree in their regulations on the definition of the Self Rescue Zone, as follows: The downstream region of a dam where authorities are not able to provide assistance prior to the arrival of the flood wave in case of dam break alert, which is assumed to be 10 kilometers or the distance the front end of the rupture wave can travel in 30 minutes.
Colorado Department of Natural Resources (2010) regulates that the simulation of dam break events shall take place to characterize and identify locations which may be potentially threatened.
The bibliography shows diversity in modeling methods of breach opening which may lead to equally diverse results regarding potential damage in the self-rescue zone.
This paper cites details that may be considered when modeling a dam break event and sheds some light on results acquired from different breach opening equations. The US Army Corps of Engineers software HEC-RAS 5.0 (Hydrologic Engineering Centers River Analysis System) was used and applied to Santa Branca Dam, an earthen dam located in São Paulo state in Brazil.
Read more…