Mark Forest is one of the most knowledgeable H&H modelers I know.  He’s also a very experienced RAS modeler.  Here he discusses the benefits of the relatively unique subgrid bathymetric approach to terrain surface discretization that HEC-RAS uses, specifically on the topic of computational mesh cell size.  Read this.  Then read it again.  This is important stuff if you’re a 2D HEC-RAS modeler.  -Chris Goodell

During one of the 2020 ASFPM virtual conference sessions on H&H modeling a question was asked about comparing HEC-RAS to other 2D modeling tools, specifically relating to the need to compare modeling platforms using the same relative number of cells and relative cell size.   I thought it might be valuable to distribute the basic core discussion that followed the conference session for the benefit of all…

Like most 2D models, HEC-RAS performs the calculations from cell center to cell center.  HEC-RAS calculates the momentum at the cell faces which are cut from the terrain with irregular geometry at the cell face based on the underlying terrain.  Additionally, the cells are detailed elevation volume curves, also cut from the terrain.   So, the flows entering and exiting the cell (and the associated momentum) are influenced by the volume within the cell and where the flow enters and exits the cell.  The irregular cell faces will influence the velocity, pressure gradients, velocity vectors and the momentum entering and exiting the cell more accurately when using this terrain detail at the cell faces and cell volume relationships.   This allows RAS to also see a preferential flow path through the grid cell and wets only the portion of the cell that is below the computed water surface for a given time step.     The subgrid detail influences the momentum calculation by influencing where the flow is directed into and out of the cell using that terrain detail, appropriate length between cells based on a refined definition of the vectors and velocity based on the cell face details like the example below: 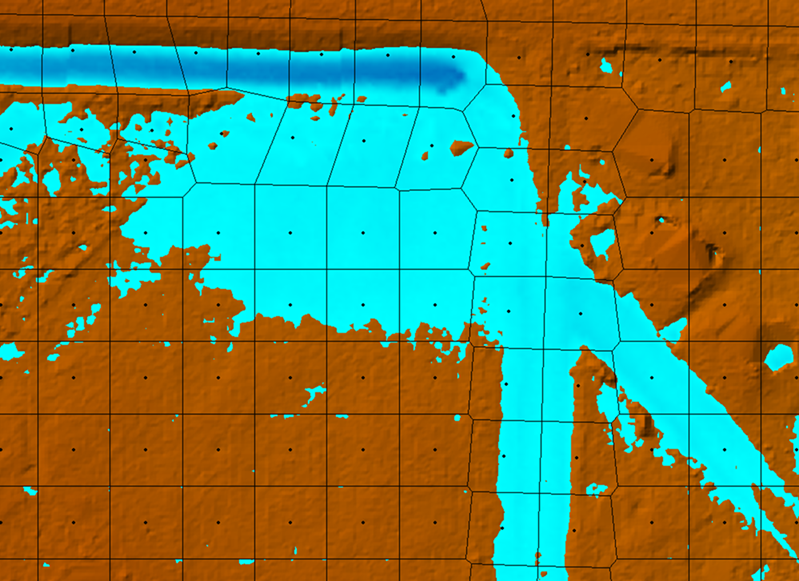 Most 2D models treat the cell as an average single elevation or as a sloped triangular or rectangular plane and the faces as a flat or sloped surface.  This format requires the cells to be much smaller to capture the same level of detail, volume and face velocity as HEC-RAS achieves with the subgrid terrain detail.  When a 2D model uses a single elevation to represent the grid cell, it also means that the entire cell is either wet or dry.

The use of the terrain detail in the HEC-RAS calculations allows the momentum solution to be more accurate since it is not simplifying the solution at the cell face and it can detect a preferential flow path into and out of each cell.  So, that is why larger cells can be used for a RAS simulation to get a comparable answer to a tool that simplifies the cell representation as a single elevation or a sloped triangular or rectangular plane.   The only reason to compare RAS with the same number of cells with a code that uses only average cell elevations and faces, is to compare run times only on the basis of the number of mesh elements, not run times for a solution that provides a comparable level of accuracy of the simulation (which is a more appropriate comparison).   But, if you can get an equal or even more accurate answer with HEC-RAS with fewer cells (provided that the cell faces are properly aligned with key terrain features that influence flow patterns), then a proper basis of comparison with other tools should be performed  based on a comparable representation of the terrain in the hydraulic computations rather than a comparable number of cells or nominal cell size.   Basing run time comparison only on number of elements would be misleading, and completely ignores the benefit of the subgrid terrain used for the cells and the faces.

A follow-up question was asked about the results sensitivity to cell size when using HEC-RAS.   While all 2D models need to be strategically designed to capture the hydrodynamics at the level of desired detail, the general answer is that RAS is fairly insensitive to grid size in general when the grids are properly aligned with key terrain features.   Most other 2D models require more optimization (and smaller cell sizes) of the cell sizes due to the fact that the terrain is being simplified as a flat element or plane.   This means that most 2D models will be more sensitive to cell size variation than RAS is due to the way RAS treats the underlying terrain in the computations.   I have tested grid size sensitivity with simulations that are more dynamic, such as a dam breach analysis with very rapidly varied flow, with little difference in the results with a reasonable range of grid sizes provided.  As long as elevated roads and other topographic features are captured with breaklines and an appropriate time step and range of grid sizes are used.

One of the reasons these arguments get made is to advertise model performance differences (run times), so arguing that the same number of cells should be used for this comparison is more of a sales argument than a hydraulic modeling argument.   Even this argument is becoming less relevant as HEC has continuously implemented speed enhancements with each version.    Version 5.1 will make yet another leap forward in computational speed which is important to all of us who are looking for ways to optimize model performance.   But, as you do, consider your mesh element size needs based on how the model will be used.   If you need to capture superelevation around a bend, you will need smaller mesh elements.  If you want to more accurately capture the velocity distribution around a structure, you may need smaller mesh elements.   Just keep in mind how the computations are performed, what terrain details your model is able to detect and focus on making sure your terrain is of the quality needed since RAS sees terrain details and any associated imperfections, like gaps in levees due to lack of lack of LiDAR mass points needed to capture those features.

Another major point to consider:  Lets say we are modeling a stream where the main channel is around 500 feet wide, and is highly variable in its terrain.  In order to capture the correct volume of the channel, and the correct area/wetted perimeter, models that use flat cells or triangles must have 10 to 15 cells across the channel, or even more.  HEC-RAS can get the the correct volume and the correct area/wetted perimeter with even one cell across the channel.  If someone is interested in more than just the water surface, then they could use 5 to 7 cells across the channel, or whatever number of cells they desire, in order to get the velocity distribution at the level desired.  We have proven that this works on many studies.  We presented a paper on this at the 2017 ASCE EWRI conference “HEC-RAS Subgrid Modeling: Benefits and Limitations with Example Applications”, Sanchez, Brunner, and Chacon.  Many users have done these same tests on their own and compared there results to other models using finer meshes.  FEMA has a comparison of FLO2D, TUFLOW, and RAS, where they show RAS can use much larger cells and still get the same 1% chance floodplain and basically the same Floodway.