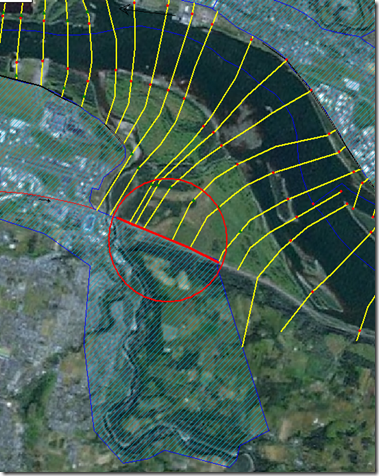 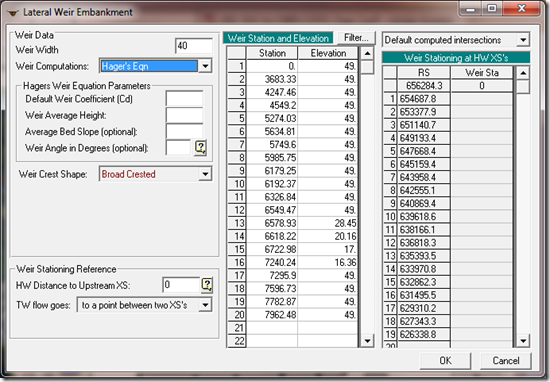 You can read more about Hagar’s equation in the HEC-RAS Hydraulic Reference Manual on page 8-17.
Useful references for lateral structure weir coefficients (including Hager’s):

However, none of these references discuss lateral weir coefficients for lateral flow transfers over natural ground, or surface flow (i.e. non-elevation overbank terrain).  HEC has a reference table for lateral structure coefficients that I like to use-it’s also included in the new “Combined 1D and 2D Modeling with HEC-RAS” document that was released in August 2013, in anticipation of the new 2D feature in HEC-RAS expected to be released as a beta version in the January/February 2014 time frame.   Note how low the suggested range of coefficients is for “non-elevated overbank terrain.”  Because they are not dimensionless, be aware that weir coefficients in SI Units are different from US units by a factor of the square root of the ratio of the SI gravitational constant to the US gravitational constant,

Although this table is presented within the context of 1-D to 2-D flow transfers, these values will work with river/reach to storage area or river/reach to river/reach flow transfers as well.  As noted in the referenced document (HEC 2013), “In general, Lateral Structure weir coefficients should be lower than typical values used for inline weirs.  Additionally, when a lateral structure (i.e. weir equation) is being used to transfer flow from the river (1D region) to the floodplain (2D Flow Area), and then [sic] the weir coefficients that are used need to be very low, or too much flow will be transferred.”  Also, “The number 1 problem people have been having with interfacing 1D river reaches with 2D areas, is user’s [sic] have been using way to [sic] high of weir coefficients for the situation being modeled.  If the lateral structure is really just an overland flow interface between the 1D river and the 2D floodplain, then weir coefficients in the range of 0.1 to 0.5 must be used to get the right flow transfer and keep the model stable.”