In the current version of HEC-RAS (v 4.1.0) there are two methods of modeling the hydraulics at a junction for unsteady flow. By default RAS selects the Force Equal WS Elevations (Forced) method, which forces the upstream bounding cross-sections’ water surface equal to the downstream water surface. This method may be adequate for some situations like high depths and shallow bed slopes, but can also cause major instabilities in your model if depths are too low and/or bed slopes are too steep. The alternative is the Energy Balance (Energy) method, which uses the energy equation across the junction to solve for WS elevations. The model presented in this post is part of a dam breach simulation and will demonstrate that there can be significant differences between the two methods. This simulation is a hotstart run which seeks to identify stability issues by starting the downstream stage artificially high, and slowly lowering it to the true solution over the run time. The river system in this model has a normal flow combining junction with a steep transition. Special attention will be paid to the steep transition, especially at low flow conditions. The Figure 1 below shows the 3D view of the model extents, which includes the Middle Reach, Tributary C and Lower Reach. 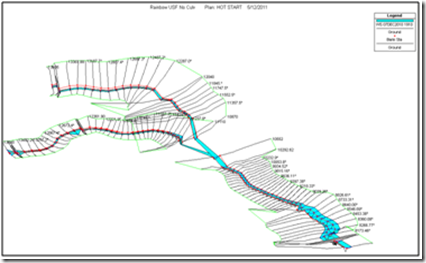 For a normal flow-combining junction, the water surface elevations at the upstream bounding cross-sections are based on the computed downstream WS elevation. Longer lengths between the bounding cross-sections will generally make your results less accurate and less stable. By looking closely at the above figure you can see that the bounding cross-sections are spaced far apart, which corresponds to long junction lengths. The results for both methods are shown below in a series of profile plots. Figures 2a and 2b show the junction approximately halfway through the simulation. Figure 2a shows the Energy Balance method and Figure 2b shows the Forced Equal Water Surface method. The water surface is high enough that there are no differences between the two methods. For reference, Tributary C is the steeper of the upstream reaches. 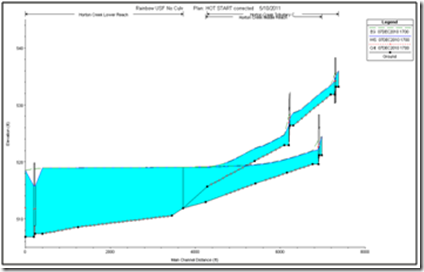 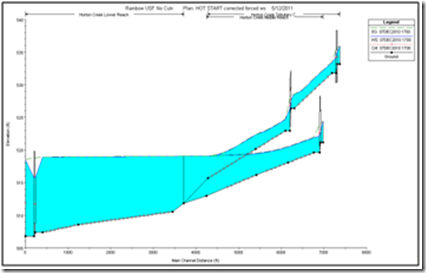 Significant differences develop in Figures 3a and 3b as the downstream stage is lowered. At the same time-step, the two profiles are dramatically different. The Forced method produces a large drop at the junction (Figure 3b), while the Energy method produces only a minor instability (Figure 3a). The large drop (shown in Fig. 3b) occurs because RAS must balance the momentum equation from the upstream bounding cross-section at the junction (an unrealistically low water surface) to the cross-section immediately upstream. The only way to provide a balance is to overestimate the upstream WS elevation, which is why the profile for 3b is much higher than 3a. Notice the spike in the energy grade line. The same problem occurs for the Energy method, but at a much smaller degree. 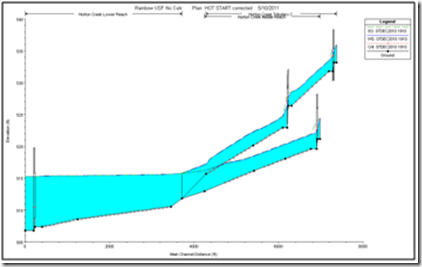 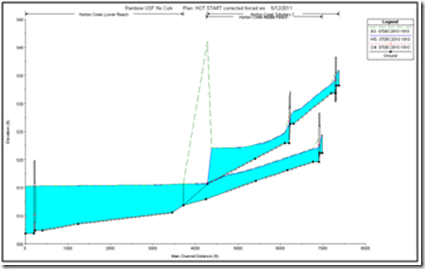 Figures 4a and 4b show Tributary C only, just prior to the model crashing for the Forced Equal Water Surface method. There are obvious oscillations in the profile plot, which indicates a very unstable solution. As the stage is lowered downstream, the WS elevation at the junction also becomes lower. At a certain point the WS elevation at the junction approaches the invert for the upstream cross-section; and the model crashes. Figure 4b shows a zoomed in view of the WS elevation relative to the invert of the channel as the channel runs dry. 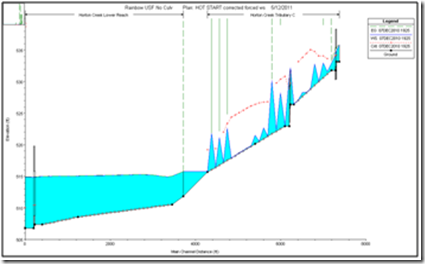 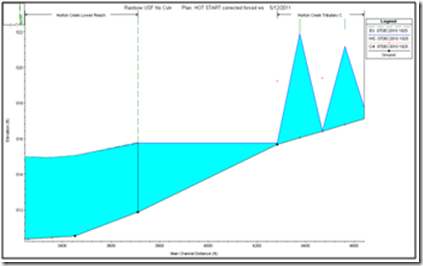 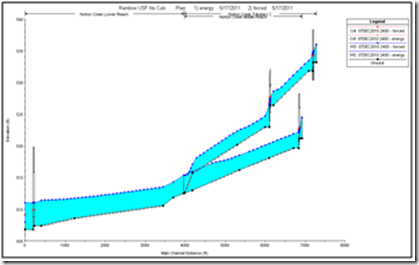 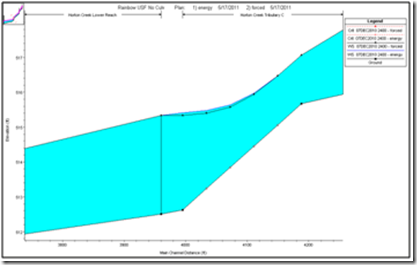 By redefining the geometry around the junction the error is significantly reduced for both methods and the results appear stable. Both profiles are very similar in this case, showing only a slight difference in WS elevations. The dotted line-type represents the profile for the Forced method. It might not always be possible, or realistic, to place new cross-sections close to the junction. The Energy method allows this model to run to completion without the addition of new cross-sections, though the results appear to not be as good. The table below lists the WS elevations at the bounding cross-sections for each of the different plans: the initial Energy method, and the Forced and Energy method after adding additional cross-sections. 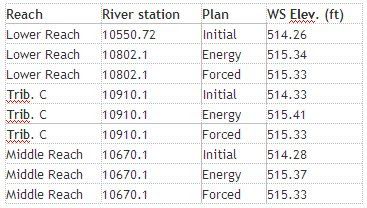 The initial plan has the geometry with the long junction lengths, which consistently calculates lower WS elevations than the plans with shorter junction lengths. Although the elevations were underestimated in the initial runs, they are still within 1 ft of the new profiles. For this model, the Energy method provides a stable solution at the junction without having to modify the geometry. However, given the steepness of Tributary C, the addition of cross-sections near the junction improved the accuracy and stability of the model output. Therefore, even though the Energy method can produce stable results for long junctions in steep reaches, adding more cross sections will improve the results.