Though it’s not very common, it is possible to get negative flows over inline structures for unsteady flow simulations.  It’s much more likely you’ll see negative flows over a lateral structure though.  Negative flows are simply discharges in your model going the opposite direction than what you have defined as the downstream direction (or primary flow direction).  This can occur in tidal areas, backwater, or complex looped networks.  For lateral structures, you may have water spill out of your river over a lateral structure and into a storage area.  Once the flood wave passes, the head level in the storage area is higher than the river and water flows back into the river (negative flow).  It’s called negative flow because RAS will show it in tables and plots as a negative number.
Recently, an HEC-RAS output table issue was brought to my attention, directly related to negative flows over weirs.
“I was looking through the HEC-RAS file for the XYZ model for the 72-hr PMF and came across the following.  Do you know what -1.#INF means?” 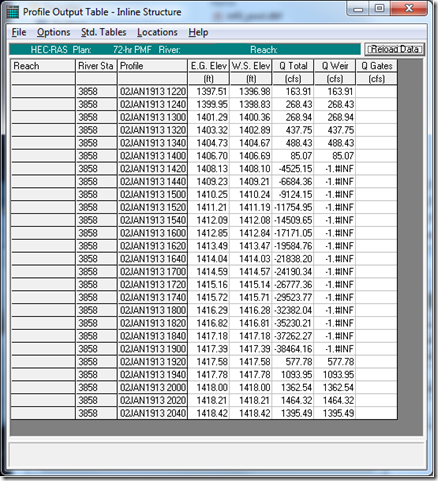 In this example, the water surface elevation downstream of the inline structure exceeds the water surface elevation upstream of the inline structure between the time of 1420 hrs and 1900 hrs on 02 January, 1913.  During this time range, we have a negative head differential and thus a negative flow over the inline structure (from downstream to upstream).  During a simulation, when an inline structure is overtopped by water, RAS uses the same equation (the weir equation with adjustments for submergence) regardless of the direction of flow over the inline structure.  The -1.#INF is the double precision floating point default return in the Visual Basic programming language for any unreal number (i.e. you may remember imaginary numbers, “i” from high school math class).  Well RAS is trying to take a negative number (in this case the head differential) to a non–integer power, (1.5 for the weir equation, Q = CLH^1.5).  There is no real solution for this.  The good news is, this is only happening in the table, as RAS recomputes the Q Weir to populate the table using the steady flow engine.  Presumably, that is why RAS cannot deal with negative head differentials, since there is no negative flow in steady flow modeling.  During the unsteady flow computations, RAS correctly removes the negative sign to do the computations and then replaces it to show flow in the “negative” direction.  That’s why the computations work and why the Q Total is negative (which is presumably what Q Weir should be in this example).  So, in short, the unsteady flow computations are fine-the solution is correct.  The problem comes when reporting results to the Inline Structure Table.  Hopefully this will be fixed for the next version of HEC-RAS.  Until then, you can use the stage and flow output hydrographs to verify the total and weir Q’s.