Now that 2D modeling is becoming widespread in the HEC-RAS community, a lot of HEC-RAS users are wanting to know what kind of computer to build to maximize computation speed when running those large 2D datasets.  I had an opportunity to interview Gary Brunner about this and he had some valuable insight I’d like to pass along. 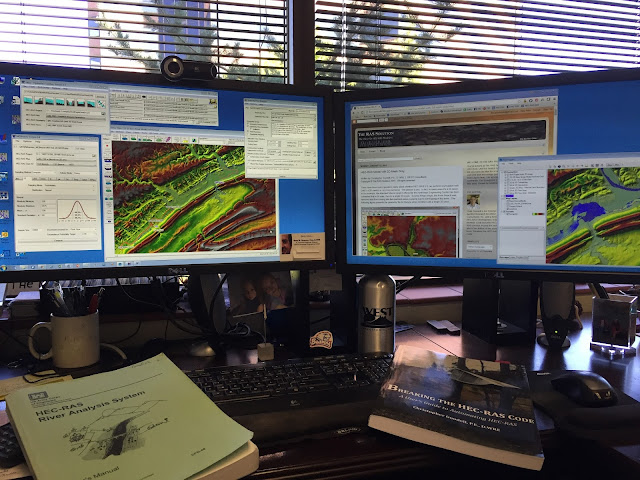 Before moving into suggestions for 2D modeling, let me first state that in 1D modeling, multiple processing cores are NOT used.  If you plan to only do 1D modeling, having extra cores will not help you with speed.  In this case, the processor speed is everything.  So get the fastest processor you can (e.g. 3.4 Ghz or higher).
For the rest of this post, I’ll assume you want to optimize your computer for 2D HEC-RAS modeling, since those are the models that typically will take longest to run. 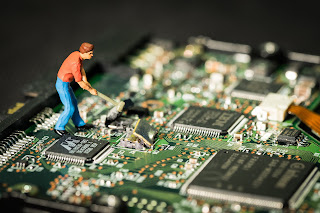 To sum up, my recommendation for building a computer to optimize 2D runs in HEC-RAS is as follows:

Pretty simple really.  And by the way, 24-inch (or larger) dual monitors really helps with viewing all those HEC-RAS windows you have open.  But if you have the means, why stop at two monitors? 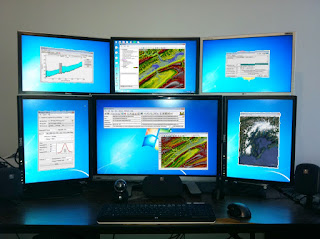 Starting on page 4-11 in the HEC-RAS 2D Manual, there is an interesting discussion on the effect of number of processing cores in computations.  I suggest giving it a read.  There will be a new chapter in the RAS 2D manual due out soon (for version 5.0.2) that will discuss this topic.

Mr. Brunner has some follow-up advice when buying a computer that has an Intel chip that uses Hyper-threading:

“Hyper-threading is an Intel technology that attempts to keep CPU resources as busy as possible.  Each real CPU core has what appears to be two cores.  However, there is really only one true core.  For example, the typical Intel I7 chip has four real CPU cores, but if you open Task Manager and go to the Performance Tab, you will see four across the top, and what appears to be four more below it.  These are virtual cores.  Each real CPU core has only one true math processing unit, but with Hyper-threading it has two instruction feeders.  Hyper-threading tries to eliminate stalls by always having another thread at the ready in a second virtual core.  If one thread stalls (not requiring the math unit) on virtual core A, virtual core B will instantly start picking up the slack, so the execution units keep working at 100%.

The RAS 2D compute engine is extremely math heavy.  So for each core it utilizes, it is almost always using 100% of the math unit.  So the second virtual core (Hyper-thread) is never used.   So back to our Intel I7 chip example.  An Intel I7 has 4 real cores, but appears to have 8 cores (4 virtual cores).  RAS will only use the four real cores, and it will keep them almost 100% busy.  However, Task Manager reports this as only 50% utilization of the CPU.  However, this is truly 100% utilization of the four real cores math units.”

What has been your experience with running fast HEC-RAS simulations on your computer?  Please leave a comment and share with us what you’ve learned about how your computer performs. In fact, if you have a good picture of your suped up machine running HEC-RAS, please share!

You've arrived at The RAS Solution. The best help site for all things HEC-RAS. Use the Search bar to find topics you are interested in. Do you have an idea for a blog post to The RAS Solution? I welcome and encourage guest authors. Please follow the instructions here. I do receive a lot of questions in the post comments. I try to respond to all questions, but sometimes it gets a little busy. Please be understanding. New to HEC-RAS? Here's a video from Practical Engineering on some of the great things that HEC-RAS can do and this post provides some great ideas for getting started with HEC-RAS.

Chris Goodell, Principal Consultant for H&H at Kleinschmidt Associates, is a former HEC-RAS Development Team member and teaches HEC-RAS courses around the world. He is the author of the popular book "Breaking the HEC-RAS Code."

This book covers one of the most powerful, yet relatively unknown features available in HEC-RAS: the HECRASController! The HECRASController API has a wealth of procedures which allow a programmer to manipulate HEC-RAS externally by setting input data, retrieving input or output data, and performing common functions such as opening and closing HEC-RAS, changing plans, running HEC-RAS, and plotting output.

New Look to The RAS Solution

The RAS Solution has a new and improved look. We're still working through a few glitches, but things will be 100% soon.

Hey RAS Users- This is a basic level steady flow HEC-RAS class.  That’s right, we start from the very beginning…