HEC-RAS has the ability to simulate flow at hydraulic controls in a variety of ways. 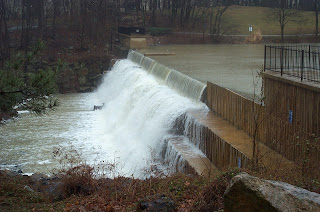 Bridges, culverts, inline structures, lateral structures, and SA/2D area connections can all act as hydraulic controls.  Effectively, they break up the conservation equations used between cross sections in a 1D reach and/or cells in a 2D area with empirically derived (and usually very stable!) equations.  Weir equations can be used to define flow over an obstruction and are available with all of the 5 hydraulic controls identified above.  However, there are a number of options to consider when selecting simulating weir flow in HEC-RAS.  HEC-RAS approaches weir flow with three different cases:  Ungated Inline Weirs, Ungated Lateral Weirs, and Gated Weirs.  They all begin with the same standard equation: 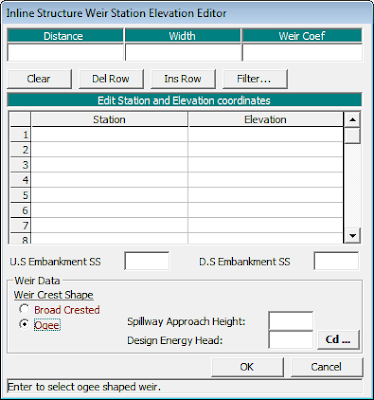 Figure 1.  Inline structure weir embankment editor.
Both use the same standard weir equation presented above in equation (1).
The only difference between the Broad Crested Option and the Ogee Option is that for the Broad Crested option, the user enters a weir coefficient for C.  For the Ogee option, the user enters a spillway approach height and the ogee’s design energy head, and HEC-RAS will compute the weir coefficient for you.  This may sound convenient, but as the name implies, this option should really be used only for ogee-shaped spillways.  And you would have to know what the design energy head is, a design parameter that is not usually easy to come by, unless you have the hydraulic design report for the spillway.  With both options, submergence reduction of the discharge is automatically calculated with their own respective methods (FHWA ,1978 for broad crested, and COE, 1965 for ogee).
Ungated Lateral Weirs.
Lateral weirs are entered in the lateral structure editor.  Inside the lateral structure’s weir embankment editor, you’ll see two options for weir computations:  Standard Weir Eqn. and Hager’s Eqn. 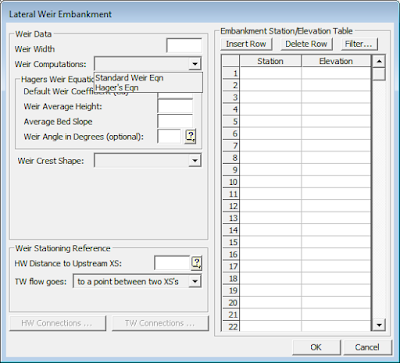 Figure 2.  Lateral Weir Embankment Editor.
In version 5.0.1, the Standard Weir Eqn. provides four options for the weir crest shape:  Broad Crested, Ogee, Sharp Crested, and Zero Height.  Caution!  Zero Height is NOT used when Standard Weir Eqn. is selected.  This is a bug and will most likely be fixed for future versions.  If you do select Zero Height and Standard Weir Eqn. together, HEC-RAS will just use the weir coefficient you provide with the broad crested methodology.  Sharp Crested is not fully functional in Lateral Structures for version 5.0.1.  You’ll notice that no additional input options (like Rehbock and Kindsvater-Carter, as discussed under the next section, “Gated Weirs) are available when you select Sharp Crested in the lateral weir embankment editor.  My guess is that if you select Sharp Crested, it too will default to the broad crested methodology.
Broad Crested and Ogee work the same as with the ungated inline structures.
With Hager’s Equation, all four weir crest shapes are available, including the zero-height weir.  The same weir equation is used, but an adjusted weir coefficient is computed based on physical and hydraulic properties.  Each of the four weir types has its own method for computing the adjusted weir coefficient.  There is an input box for “default weir coefficient”.  This is only used for the first iteration of solving Hager’s Equation.  Since Hager is a function of hydraulic properties, it must be solved in an iterative fashion.  After the first iteration, the adjusted weir coefficient will be computed and used.  Page 8-18 of the Hydraulic reference manual discusses Hager’s equation and how the adjusted weir coefficient is computed.
Zero-height weirs are used for cases where flow will leave a channel laterally, but there is no defined obstruction or hydraulic control separating the two.  Commonly this is used to simulate flow from a main channel up a tributary that is being modeled using a lateral structure and a storage or 2D area.  The HEC-RAS 2D manual has a table of lateral weir coefficients (Table 1).
Table 1.  Lateral Weir Coefficients (from the HEC-RAS 2D Manual, page 3-50). 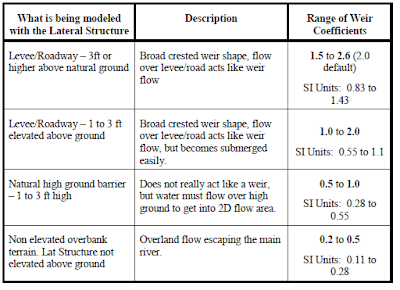 Notice the last category is “non elevated” overbank terrain.  If you wish to use the weir coefficients in this table to simulate a non-elevated weir, do not use the Zero-Height weir.  That is strictly for Hager’s equation and Hager’s method automatically computes the weir coefficient.  Instead, use the broad crested standard equation and enter in the non-elevated weir coefficient there.
Gated Weirs.
When modeling gated spillways at inline structures or lateral structures, users can provide a weir coefficient for flow over the spillway when the gate is completely opened, and out of contact with the flow (Figure 3). This is different from the discharge coefficient used for flow over the top of the inline structure (Figure 1). 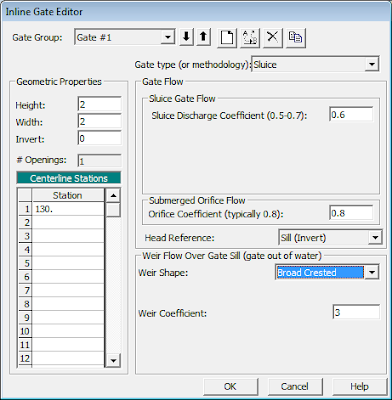 Figure 3. Inline Gate Editor
With gated spillways, the user has three options for the weir shape:  Broad Crested, Sharp Crested, and Ogee (Figure 4).  Broad Crested and Ogee work the same as previously discussed.  The Sharp Crested option also uses the standard weir equation but gives you three options for determining the discharge coefficient:  user-entered, compute with the Rehbock equation, or compute with the Kindsvater-Carter equation.  For both the Rehbock and Kinsvater-Carter methods, the weir coefficient will be computed independently at each time step. So you can have a varying discharge coefficient for varying heads. 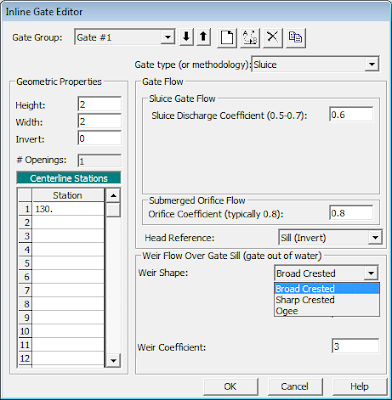 Figure 4.  Inline Gate Editor.
The Rehbock equation for the discharge coefficient was developed for rectangular weirs and is as follows:

(3)
Where P = Spillway approach height.  This value must be entered to use the Rehbock equation.  HEC-RAS will then compute the weir coefficient, C using equation (2).   According to Ippen (1950), this equation holds up well for values of H/P up to 5.  And it performs with fair approximation for H/P values up to 10.
The Kindsvater-Carter method was developed in English units only and is as follows:

(4)
Where Ce = effective weir coefficient, ft1/2/s
kb= a correction factor to obtain effective weir crest length, ft
kh= a correction factor with a constant value of 0.003 ft
The effective weir coefficient, Ce is a function of two ratios:  L/B and H/P,
Where  L = Weir crest length
B = Average width of the approach channel
H = Energy head over the weir crest
P = Spillway approach height
Ce is a function of both the relative width and relative depth of the approach channel and is taken from the following chart (note that the chart uses the variable h1 for H.  They are the same):

Figure 5.  Effective Weir Coefficient
kb is used to determine the effective length of the weir crest and is a function of the relative width of the approach channel.  It is taken from the following chart:

Figure 6.  Correction factor kb.
To use the Kindsvater-Carter method in HEC-RAS for a gated spillway, first select the weir shape as “Sharp Crested”.  Then select “Compute with Kinsvater-Carter eqn as the Weir Method.  You must then choose a relative approach channel width (L/b) and enter the spillway approach height, P (note, b is used in the HEC-RAS Inline Gate Editor for B.  They are the same). 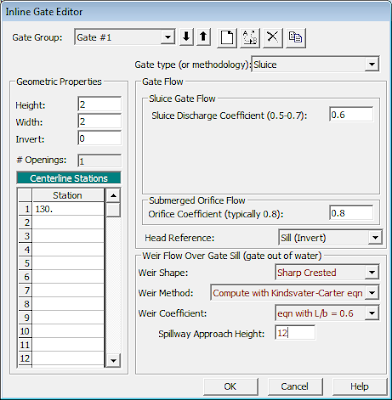