So many of us know that if you experience instabilities at or near your inline structure, you should bump up the Inline Structure Flow Stability Factor from the default of 1 to the most stable value of 3.  But what is really going on when you do this? 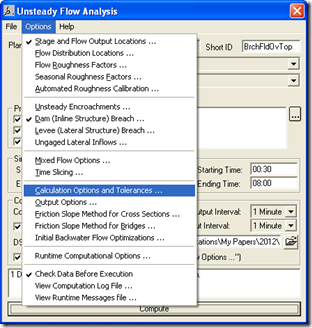 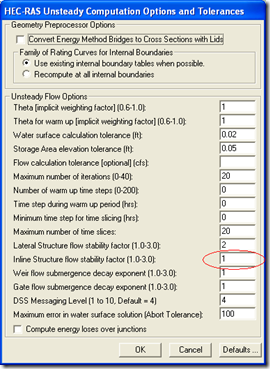 Here’s an example of a RAS model where the computations are going unstable around an inline structure and the model ultimately crashes.  Notice the energy spike just upstream of the structure.  Simply changing the inline structure flow stability factor from 1 to 3 got rid of this problem and the model ran without any errors at all. 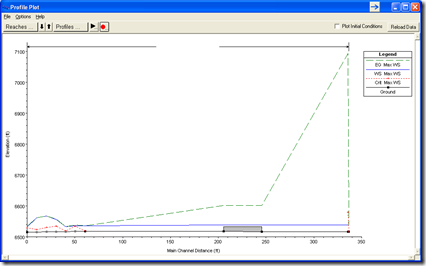 When RAS encounters an inline structure, it uses an iterative approach of guessing an energy slope projection upstream of the inline structure, then solving the weir equation.  If the guess is close enough (within the predefined tolerance), RAS calls the solution good and moves on.  Herein lies the problem.  Sometimes RAS will guess a slope projection that produces an upstream energy level that is too high.  Normally not a big deal, as the next iterative guess will try something lower and ideally the true solution will be converged upon.
However, if that first guess is so erroneous that its error oscillates and grows (instead of decays) during the iterative procedure, the model can eventually become completely unstable and crash.  The Inline Structure Flow Stability Factor seeks to dampen out or eliminate those oscillations by reducing the energy slope projection for the first iterative “guess” at inline structures.
The result is much more stability at inline structures in your model.  Contrary to other stability factors in HEC-RAS, bumping up this one from the default of 1 to the most stable value of 3 does NOT decrease accuracy.  Theoretically, you should arrive at the same answer with 2 stable models whether you use “1” or “3”.  The difference is how RAS gets to that answer in the iterative procedure.  The default of 1 uses a slope projection guess that should arrive at the answer fastest (fewest number of iterations), assuming it remains stable.  A value of 3 will arrive at the solution using more iterations, but will avoid “guesses” that may cause instability along the way.  I’ll wager that if bumping up to “3” stabilizes your model, you won’t notice the extra iterations…