Including Channel Bathymetry into your Terrain.

Let’s say you have a digital terrain model of the area you want to model with 2D HEC-RAS.  ONLY 2D RAS.  In other words, you want to lay out a grid, but do not want to have do to any 1D computations-all 2D.  The problem is the area you want to model includes one or more rivers and streams that have no bathymetric (under water topography) data represented in the digital terrain model.  This is a common problem as many sources of terrain data are collected today using LiDAR (Light Detection And Ranging).  As great as LiDAR is for collecting surface data, conventional forms of LiDAR do not penetrate water.

To adequately model 2D in RAS,
you need a terrain of your entire modeled area-including the stream channels.  HEC has come up with an easy way to weave in a channel terrain with your LiDAR terrain, IF you already have cross sections of the channel.

Open an HEC-RAS project in Version 5.0 (beta or newer) that has your cross sections represented in a geometry file.  The figure below shows an existing model of the White River in Muncie, Indiana USA.  This is from one of the standard 2D HEC-RAS data sets that come with HEC-RAS 5.0 beta. 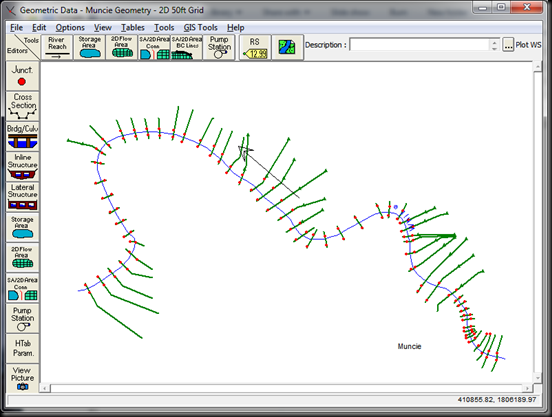 We wish to lay a grid over this entire area to model it as 2D only.  A major problem here is that the terrain below the water surface of the White River is not included in the Terrain that we have obtained.  Notice that there is no relief represented within the stream, and in fact the bridges that cross over the White River are included in the original terrain.  Bridges should not be included in the terrain-they can be added as model components in the geometry window, if it is desired to include them in your model. 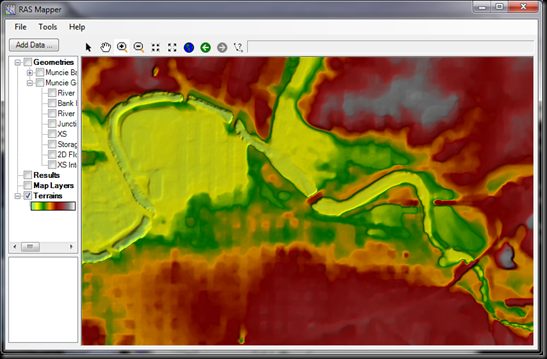 HEC has provided a way to easily incorporate our cross section data into the terrain for a single comprehensive terrain model that includes bathymetry (and no bridges in the terrain!):
1.  In RAS Mapper, first make sure a geographic projection is selected (Tools…Set Projection for Project…).  Then select to view the geometry that has the cross sections you want to include in the terrain.  Then check the features River, Bank Line, XS (XS stands for cross section), and XS Interpolation Surface.  It should look like this: 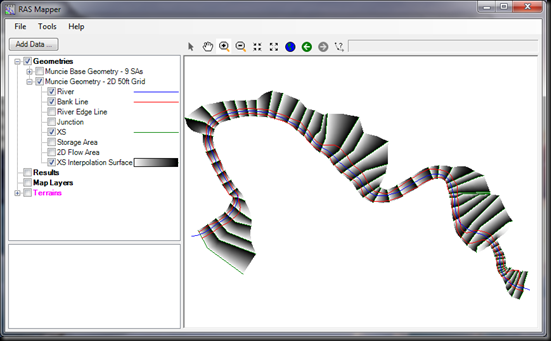 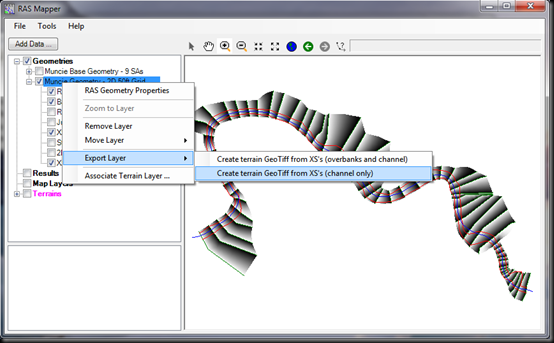 Once you select to create the terrain from XS’s, RAS will ask you to name the new terrain (a GeoTiff) and where to store it.  It will also ask you to enter in a raster cell size.  This is the grid cell size that RAS will set this new terrain to.  It should be representative of the resolution of the station-elevation data that make up your cross section.  You can view the new terrain by selecting Tool…New Terrain. 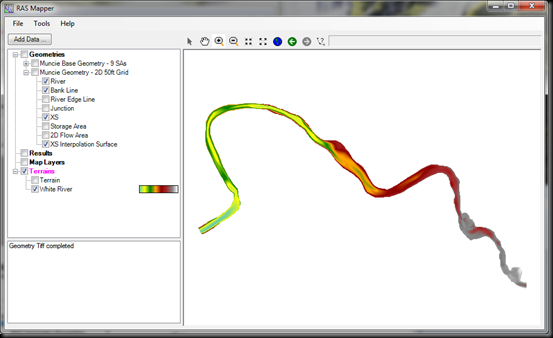 Make sure that the channel terrain (in this example…White River.tif) has the highest priority by moving it to the top of the list using the arrow button on the left.  This will ensure that where ever the two terrains overlap, the channel terrain will be used in creating the new single comprehensive terrain. After clicking the Create button, a new terrain is created that combines both the channel bathymetric data (interpolated by cross sections) and the original LiDAR-based terrain. 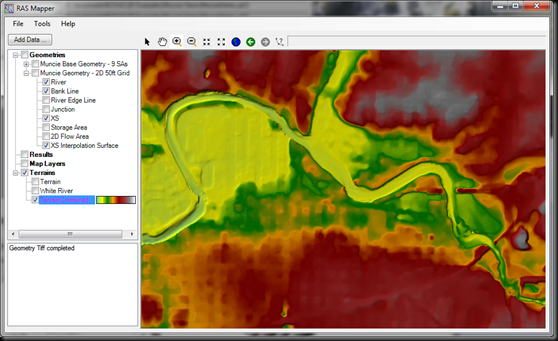 Now you’re ready to lay down a mesh and run your 2D model.   More information on working with terrains in HEC-RAS 5.0 can be found in the document “Combined 1D and 2D Modeling with HEC-RAS”.  Check the link on the side bar to download the latest version of HEC-RAS.

This article shows how to fix the "Weir Submergence Not Set" error.