If Approved, the Move Will Affect Organizations Across a Broad Geographic Range

In an effort to mitigate continued declines in bumble bee and other pollinator populations, the U.S. Fish and Wildlife Service (FWS) recently designated the rusty patched bumble bee under the Endangered Species Act (ESA). Effective February 10, 2017, the move aims to spur proactive conservation and focus resources on locating, protecting, and restoring habitat—which once stretched from South Dakota to Connecticut and two provinces in Canada. Adjustments to vegetation management and other key areas will help ensure compliance with ESA guidelines while avoiding costly delays and disruptions.

Bumble bees are among the main pollinators of crops worth $3 billion each year in the United States.

Since the late 1990s, the rusty patched bumble bee population has declined by 91 percent. During this time, their habitat has withered from 28 states to only 12, including parts of Illinois, Indiana, Maine, Maryland, Massachusetts, Minnesota, North Carolina, Ohio, Pennsylvania, Tennessee, Virginia, Wisconsin, and Ontario, Canada.

The rusty patched bumble bee population is quickly dwindling in numbers due to disease, pesticides, habitat loss, and the effects of climate change. 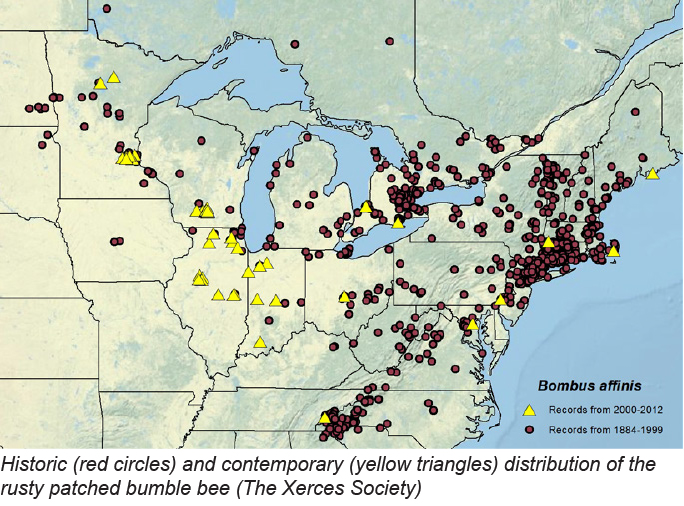 The endangered designation provides the rusty patched bumble bee with federal conservation planning and protection from harm. Thus, organizations will need to comply with federal guidelines if any future construction or operation of existing projects result in harm on or endanger the critical habitat.

This designation affects numerous organizations, most notably those with large geographic footprints or significant vegetation management activities, such as: 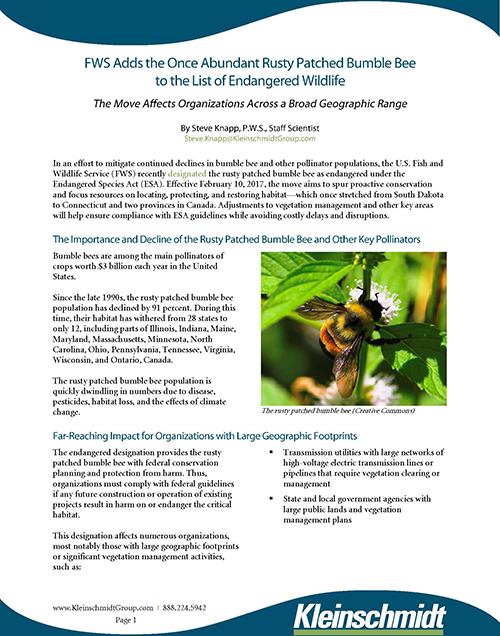 With the rusty patched bumble bee’s traditionally broad geographic range and position as the first bee in the contiguous 48 states to be declared endangered, organizations should begin taking steps now to prevent potential disruption and permitting delays.

Most importantly, organizations should start including plans to avoid habitat destruction in their government consultations. While many started this practice well before the FWS granted the species endangered status (to demonstrate practical cooperation with ESA requirements), doing so now is essential.

For example, an area that requires the attention of many organizations is vegetation management.

Transmission utilities, government agencies, and other organizations with large geographic footprints widely use pesticides to control vegetation around pipelines, public areas, and other key spaces. However, use of these pesticides, including insecticides and herbicides, may harm rusty patched bumble bees.

Per Section 9 of the ESA, various unauthorized activities may now result in a violation, including:

Ultimately, by working with an environmental consultant to develop an effective, proactive habitat management plan, organizations can position themselves to successfully mitigate the effects of the ESA guidelines while preserving the habitat of an important pollinator species.

Visit the January 11, 2017, Federal Register here to read the full text of the final rule listing the rusty patched bumble bee as endangered.